The third meeting of the Phase 2 of “Impact Investing Roundtable”, which has been held since June 2020, was held online on Monday, September 12, 2022. The purpose of this study session was to deepen understanding of impact investing among leaders involved in the financial market and government administrations, to clarify the roles and challenges of impact investing that will contribute to the sustainable development of the financial industry in Japan.

In the third meeting, discussions focused on the background and achievement of the report on impact metrics released by Keidanren in June, "Using Impact Metrics to Promote Dialogue with Purpose as Starting Point: Action for Sustainable Capitalism by Companies and Investors," as well as case studies of companies setting impact targets. Participants also discussed the role of companies and investors in creating impact.

At the beginning of the session, the chairperson, Dr. Takeshi Mizuguchi, the Chairman of the Roundtable and the President of Takasaki City University of Economics, and Mr. Satoshi Ikeda, the Vice Chairman of the Roundtable and the Chief Sustainable Finance Officer of Financial Services Agency (FSA) of Japan, gave opening remarks. Chair Mizuguchi noted that impact indicators are a major topic of discussion in impact investing, and that the fact that Keidanren, a group of Japan's leading major corporations, issued a report on impact indicators was a breakthrough and a turning point. Mr. Ikeda also expressed his expectations for the discussions at the roundtable, noting that based on the discussions at the Moral Money Summit Asia held in Singapore, the movement for companies to measure and demonstrate their impact has begun in other Asian countries as well.

Next, Ms. Miyuki Zeniya, Chairperson of the Working Group for Promoting Constructive Dialogue, Keidanren Committee on Financial and Capital Markets, gave a presentation on the use of impact metrics to promote purpose based dialogue. Ms. Zeniya began her presentation by pointing out the following two points as background for the Keidanren report: First, both companies and investors need to "evolve ESG investment," in which sustainability is viewed from the perspective of maximizing social impact and medium- to long-term market opportunities for companies. The second is the importance of purpose-driven dialogue between companies and investors. In the dialogue between companies and investors, information based on long-term goals and management strategies based on purpose; therefore, the Keidanren report was published to examine the appropriate new indicators that would contribute to such dialogue. She also explained how impact indicators should be utilized, citing the case of Dai-ichi Life Insurance Company.

Next, Ms. Saori Seki, IR Office in Main Business Administration Unit, Daiwa House Industry, gave a presentation on the challenges faced by the Daiwa House Group in utilizing impact metrics. She shared the background and process of developing the group’s "future dream (Purpose)" while inheriting the founder's spirit, and talked about the relationship with the value creation story and business model. She also shared the details and challenges of the company's efforts to utilize impact metrics, citing specific examples.

Then, Ms. Yuko Nishimura of the Sustainability Transformation Department of Recruit Holdings shared the background and process of setting impact targets at the company. As part of its commitment to sustainability toward 2030, Recruit has set the impact goals of "reducing the time it takes to get hired by half by FY2030 compared to that of FY2021" and "helping 30 million people facing barriers in the labor market around the world get hired". The presentation included details of the background and internal discussions on why these two goals were decided upon. She also talked about the reactions of institutional investors after the announcement of the impact goals.

After the above presentations, a panel discussion was held among the four presenters under the facilitation of Chair Mizuguchi. Dr. Mizuguchi began the session by sharing his impressions on the presentations. He mentioned that the world of impact investment started in the area of private equity investment targeting impact-oriented venture and start-up companies, and that impact investment for listed companies and large companies with diversified businesses might be difficult in principle. However, he noted that the founders' strong impact orientation and the fact that their core business creates impact may be a common aspect between start-up companies and large listed companies. On the other hand, he also pointed out that it is not so simple as to say that large companies just need to become impact-oriented, and in fact, large companies are sometimes criticized for their negative impact.

In response to a question about the actual discussions in the Keidanren Working Group, Ms. Zeniya and Mr. Masaki answered that, although there was initially a gap in understanding within the Working Group as to how Japanese companies as a whole should transform themselves to become more purpose-oriented, there were lively discussions based on the draft of the report. They also pointed out the importance of creating a positive dialogue for both companies and investors, even though there was a feeling on the corporate side that "even if we make a lot of efforts, will investors really appreciate it?”. Ms. Seki mentioned that when a company sets targets, they are often perceived as "must-achieve goals," and this is a hurdle for the company. The discussion emphasized the importance of a challenging attitude, and the importance of a story that links the business to the goals.

In response to a question about changes within the company as a result of the establishment of the impact targets, Ms. Nishimura explained that the clear time frame and numerical targets, along with easy-to-understand and exciting content, had the effect of encouraging employees' passions and ideas. She also mentioned that investors responded to the announcement within a few days after it was made, and that the dialogue with investors has been useful in promoting the initiatives internally, and that investors have become supporters.

The panelists also discussed the question of why sustainability of conventional economic activities has been considered a problem and why the focus is on impact if the business itself generates social value, even for large corporations. The panelists pointed out that the inequality has become increasingly serious as evidenced by the emergence of stakeholder capitalism, that we live in an era in which such information spreads rapidly through social networking services, and that even if the founder has an impact orientation, as the company grows larger, the objective becomes the continuation of the business. In response to such problems, some participants commented that the SDGs and impact are the perspectives from which the original founder's spirit and purpose can be reviewed, and that discussions on impact metrics are actually beginning to lead to a review of the company's social value and purpose, and a shift in mindset among employees.

When asked if it is difficult to measure impact metrics for large companies with diversified management, especially B2B companies, Mr. Kenji Ohno, Managing Executive Officer of Sumitomo Chemical, who participated as an observer, made a comment. He pointed out that, as a materials manufacturer, the length of the value chain and the time axis are issues, and that it is difficult to measure the impact, even though outputs and outcomes can be grasped. For example, there is a growing demand for disclosure of GHG Scope 3 and human rights, but it is not easy to quantitatively grasp the specific outcomes of the use of final products, and it is difficult to explain the rationality of hypotheses for impact measurement. Given this background, he suggested that it is important to explain the value creation story in a narrative, not just in terms of quantitative indicators.

Finally, the panelists expressed their comments and expectations for investors. In addition to expectations for deeper dialogue and long-term investment based on purpose and impact metrics, and expectations for a continued relationship of thinking together and taking on challenges, there was also a suggestion that narrative explanation and structuring of impact should be emphasized, rather than applying correlation and multiple regression analysis. It was also suggested that it is necessary for companies and investors to engage in dialogue together from a long-term perspective on how to contribute to solving issues.

During the Q&A session, there was a discussion on the relationship between visualization of impact and increasing corporate value, how to engage positive and negative impact as an investor. The discussion also focused on the importance of drawing a loop in which impacts are linked to the strengthening of the value creation basis and then returned to corporate value.

The panel discussion was followed by a breakout session in which several groups discussed "What is the key to promoting 'impact creation' in large Japanese companies?" and "What should we, as investors, focus on when we are talking with large companies about impact creation?

Regarding the former, the following opinions were raised.
-To clarify the linkage between purpose and impact, specifically, to be able to explain the linkage between the meaning of existence (purpose) and how it leads to corporate value and social value (impact) over time.
-To promote impact orientation company-wide under the commitment and leadership of management.
-To discuss from the starting point of the thoughts and ideas at the time of the founding of the company rather than from the measurement of impact.
-To add depth to the corporate value creation story.
-To continuously show impact information and KPIs to society.

Regarding the latter, the following opinions were raised.
-To take a long-term viewpoint to understand the impact and social issues, and to support the company.
-To look at impact from a holistic perspective, including negative ones.
-To communicate what social issues are important as an investor.

The meeting was attended by 37 Roundtable members from the financial market, business, and industry sectors, and 197 people observers participated including related ministries and others. 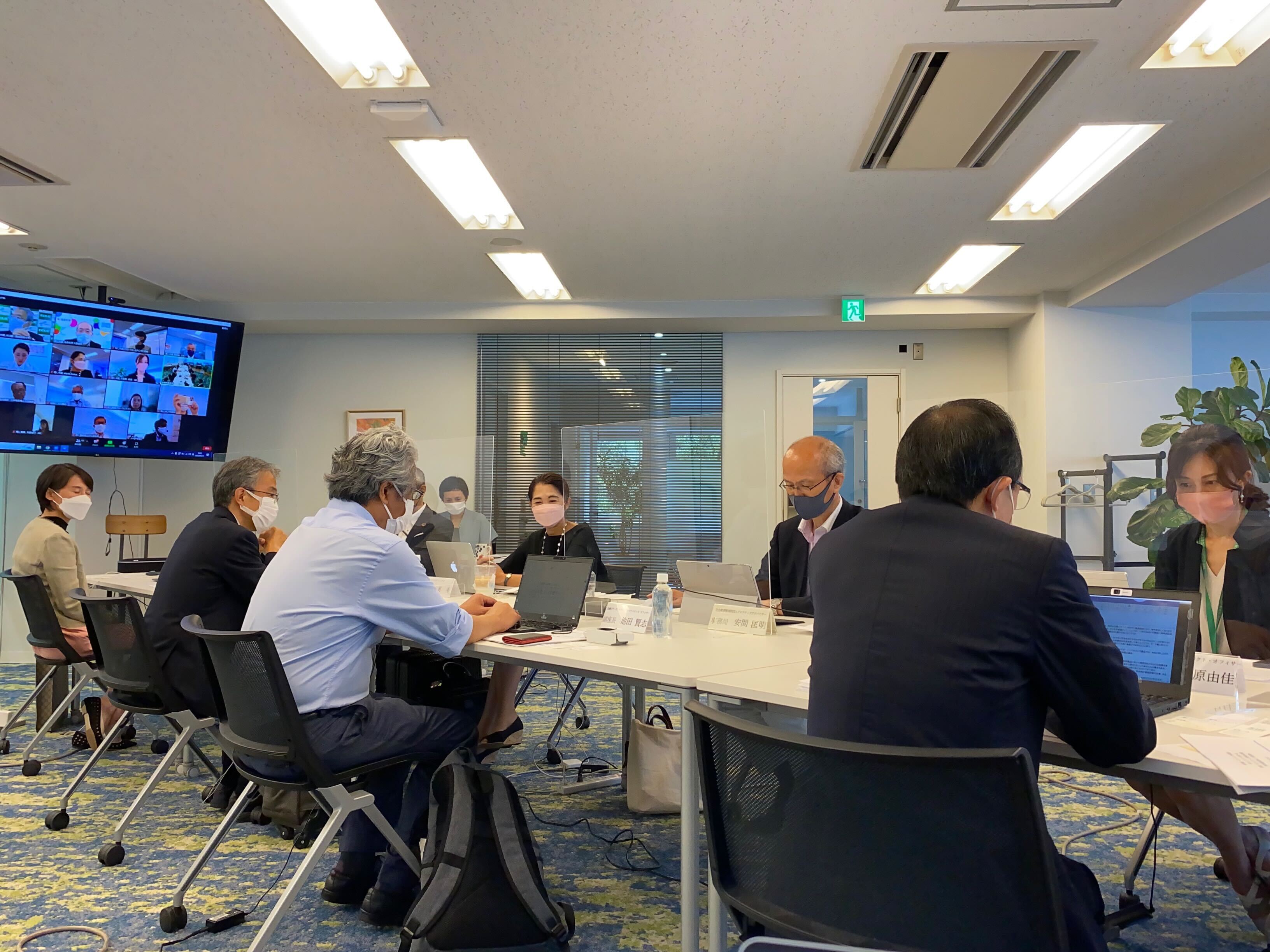